Both gold and silver fell yesterday due to rising optimism related to a vaccine as well as due to rising yields. Comparing prices to the close last Tuesday, gold is down 4.7% and silver is essentially unchanged. The ratio of the 1-month Gold contract to the 1-month Silver contract (Figure 1), while up yesterday, continued its downward move since last week.  With the front month silver and gold contracts closing yesterday at $26.04 and $1932.6, respectively, the gold/silver ratio is now 74.23, or 14.7% higher than the 15-year average. A descending gold/silver ratio is historically positive for gold but keep in mind it is nearing its 15-year average. December Gold (Figure 2) closed yesterday at $1946.3, down 3.7% from the close on Aug 4. September silver (Figure 3), while falling a massive 15% yesterday, closed at $26.09, almost unchanged from its close on Aug 4. 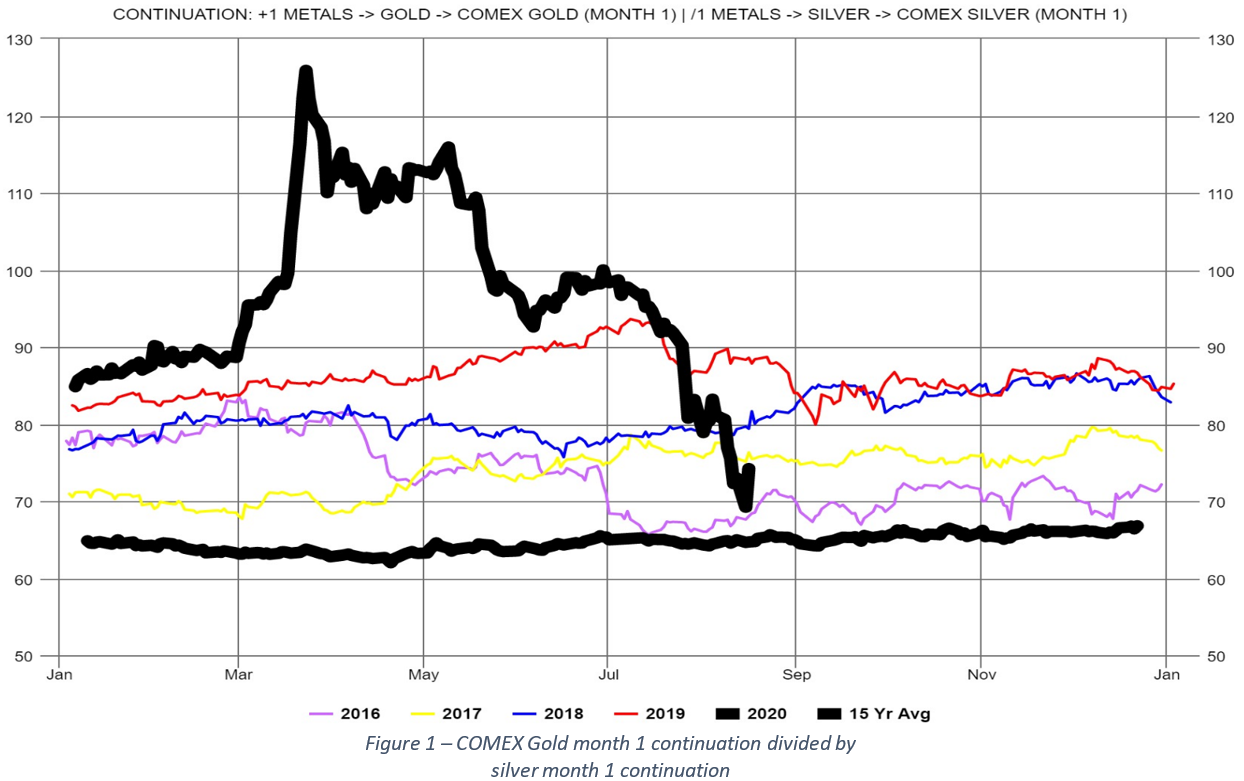 From an open interest perspective, gold’s open interest is down nearly 10% from its short-term peak on 7/23 and is down 1% for the last week, possibly signaling continued closing of long positions.  Silver total open interest peaked on Aug 6, corresponding to silver’s recent high, and is down 1%. But even with the large move yesterday, total silver open interest is little changed for the week.  What is significant is that total silver open interest has finally climbed back to levels seen prior to the COVID pandemic. Both gold and silver saw increases in the CFTC COT net funds positions between the 7/28 and 8/4 reports. But the small moves in net positions of funds are not correlated to the large moves in silver and gold, when compared to history. In our commentary last week, we questioned why gold was continuing to move up aggressively while total open interest was falling.  At the time we were concerned that gold was moving up too aggressively and the previous two days seem to confirm our concerns. 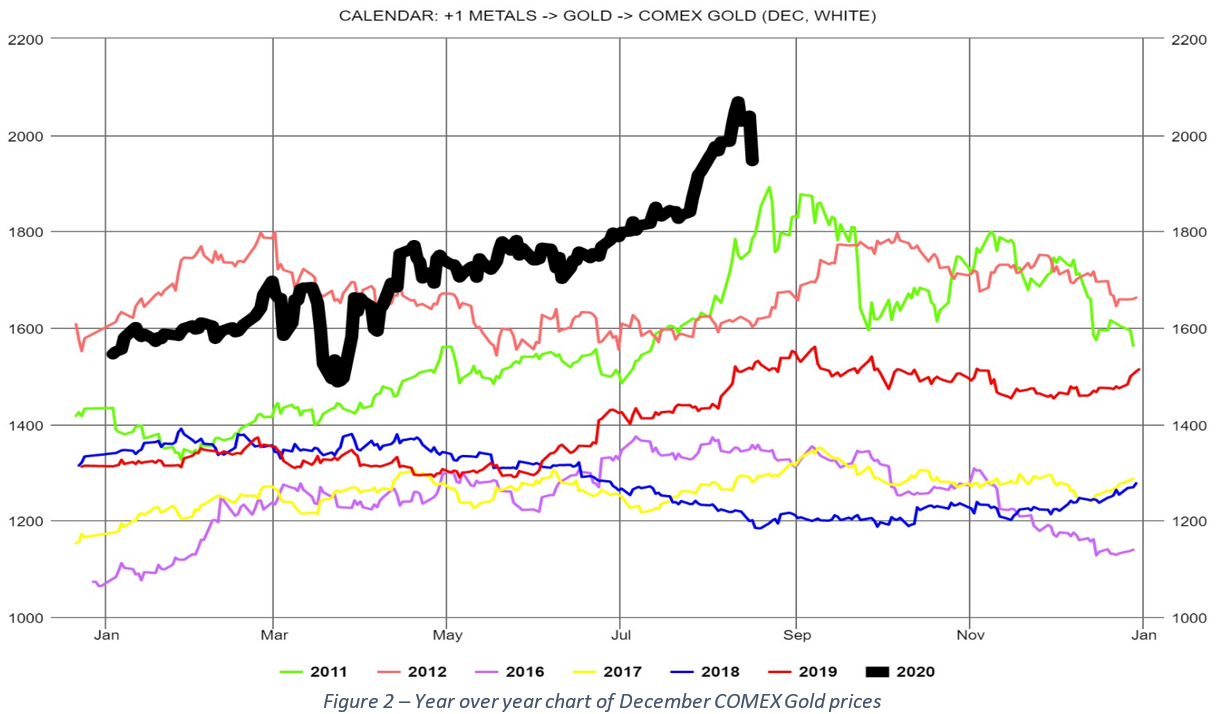 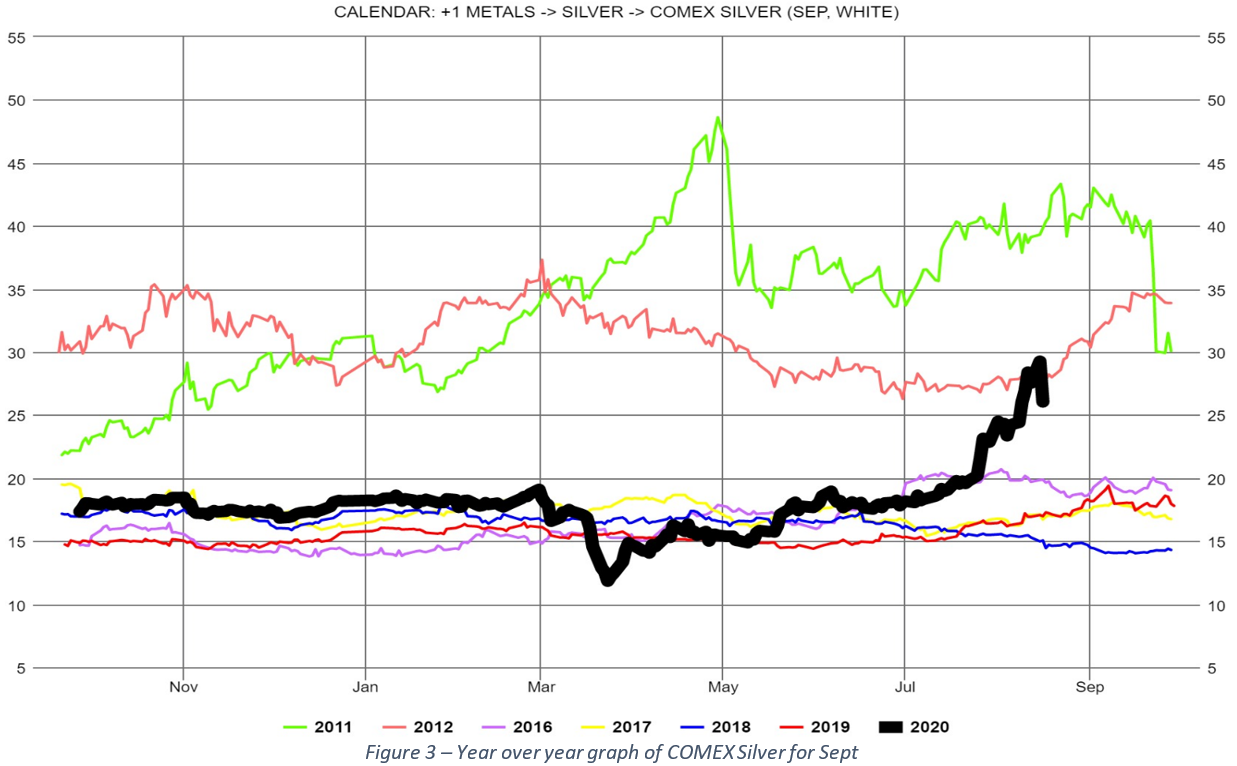 Now for Palladium. Palladium saw continued up and down movement over the last week appearing to settle into a channel between $2050 and $2450. While these moves are significant with respect to the price of palladium, they are similar to how palladium has acted for much of 2020.  It is important to note these moves are coming in an environment where palladium’s total open interest is only 30% of pre-COVID totals and volumes have recovered to about 40% of pre-COVID volumes.  The last time palladium traded at this low open interest was back in 2004, so it appears to have lost favor. As a reminder, we track both palladium and silver and compare the movements as both metals are used heavily in industry.  As the supply of palladium remains constrained with respect to expected future demand, we would expect to see palladium price gains exceed or keep pace with silver price gains as industrial demand increases.  While the price of palladium has increased, it has not done so at nearly the rate of silver during the last several weeks, indicating silver gains are driven by more than just industrial use. 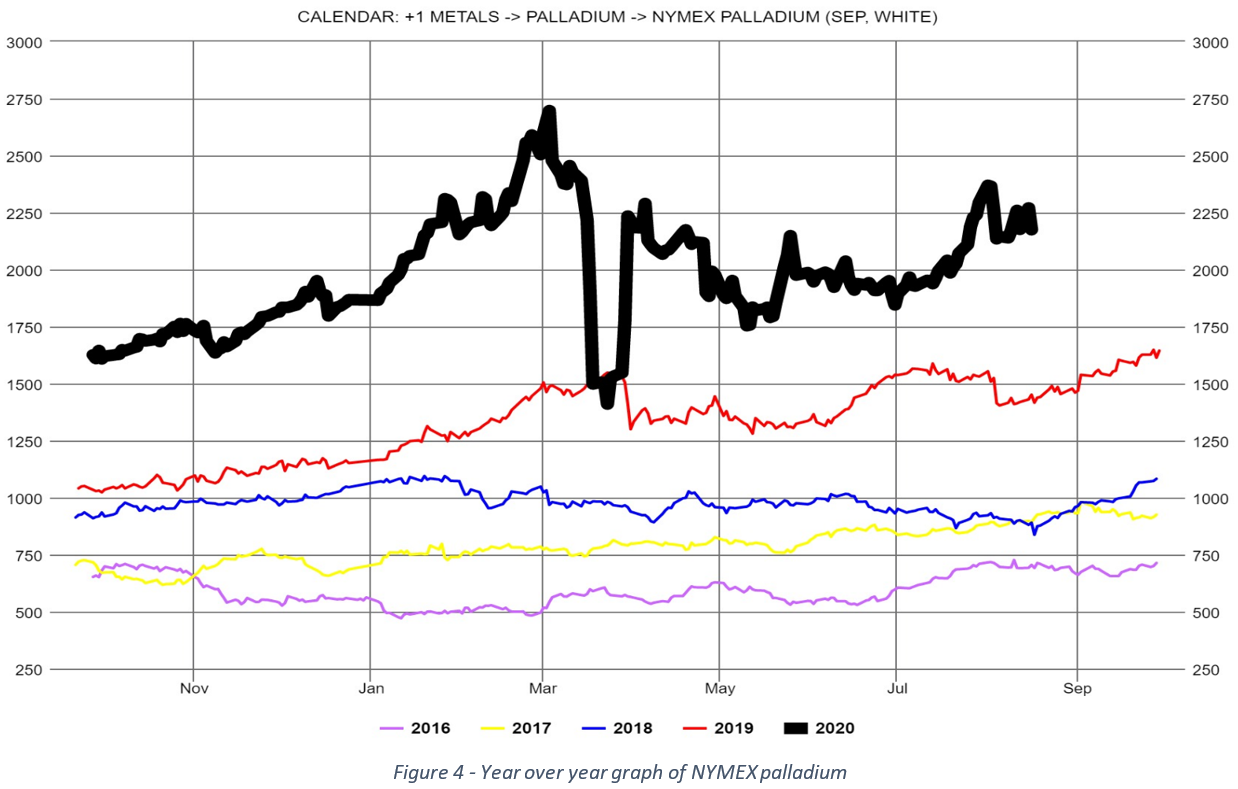 The final thoughts I leave with you today are regarding the price of gold in today’s environment.  Many recent articles have pointed to the large inflow of funds into gold ETF’s, a simple way to add gold exposure to portfolios.  (I am not for or against and I am not making any recommendations for or against). The increased buying along with the rapidly rising price of gold, then the quick drop yesterday has left many wondering what a reasonable price for gold is.  For those who are seeking to add gold as a hedge, how do they know what is a good price at which to buy?   As we have previously discussed, gold has been negatively correlated to the real yield (once inflation is deducted) of the 10-year Treasury.
As real rates (rate of interest minus inflation) went down, gold went up.  We have also discussed the article by Charlie Morris on how he values gold as if it were a bond. If you have not read the article, I would recommend and you can find it here.   As we have said for the last few weeks, we believe the continued market risks and geopolitical tensions combined with COVID are positive for gold.