The front month contracts for gold and silver are down from the close on September 15, 2020, 2.95% and a whopping 10.62%, respectively. As we expected and mentioned in our commentary last week, both gold and silver had pronounced moves this week after reaching the narrow end of pennant patterns. These moves came after the Federal Reserve provided more ‘clarity’ regarding the future of interest rates. The ratio of the 1-month Gold contract to the 1-month Silver contract (Figure 1) rose significantly by 7.9% compared to last week, reaching levels last seen in early August.  With the front month gold and silver contracts closing yesterday at $1898.60 and $24.44, respectively, the gold/silver ratio is now 77.68, 18.85% higher than the corresponding 15-year average. December gold (Figure 2) closed yesterday at $1907.60, down 2.98% from the close on September 15. December silver (Figure 3) closed at $24.52, down 10.71% from the close on September 15. 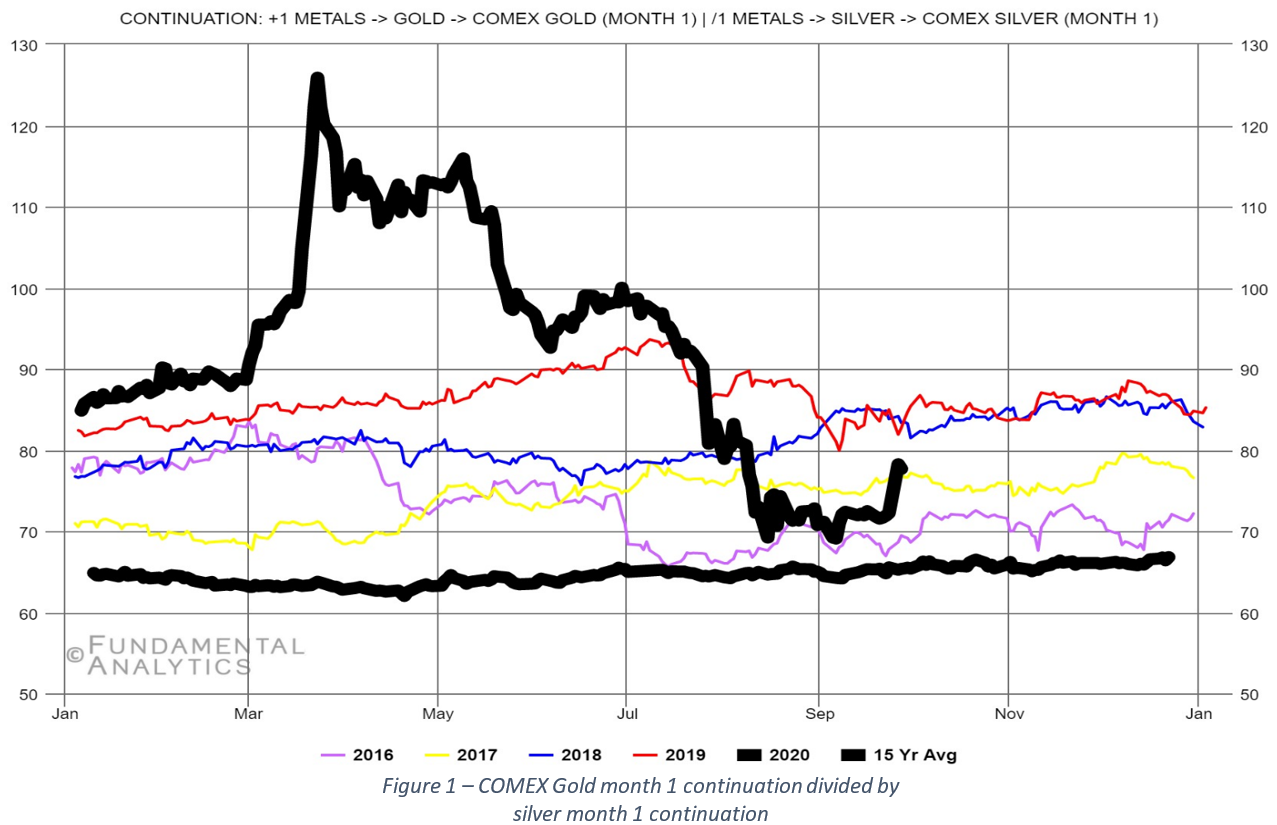 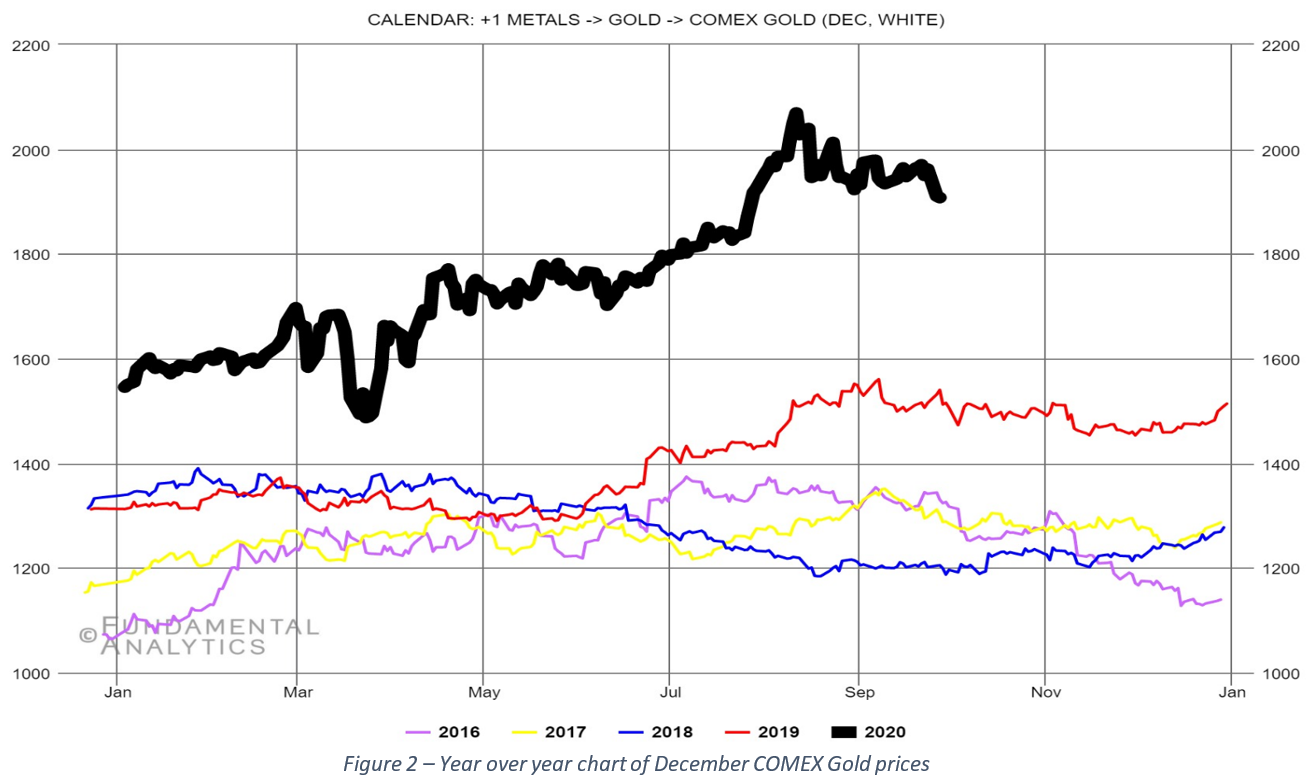 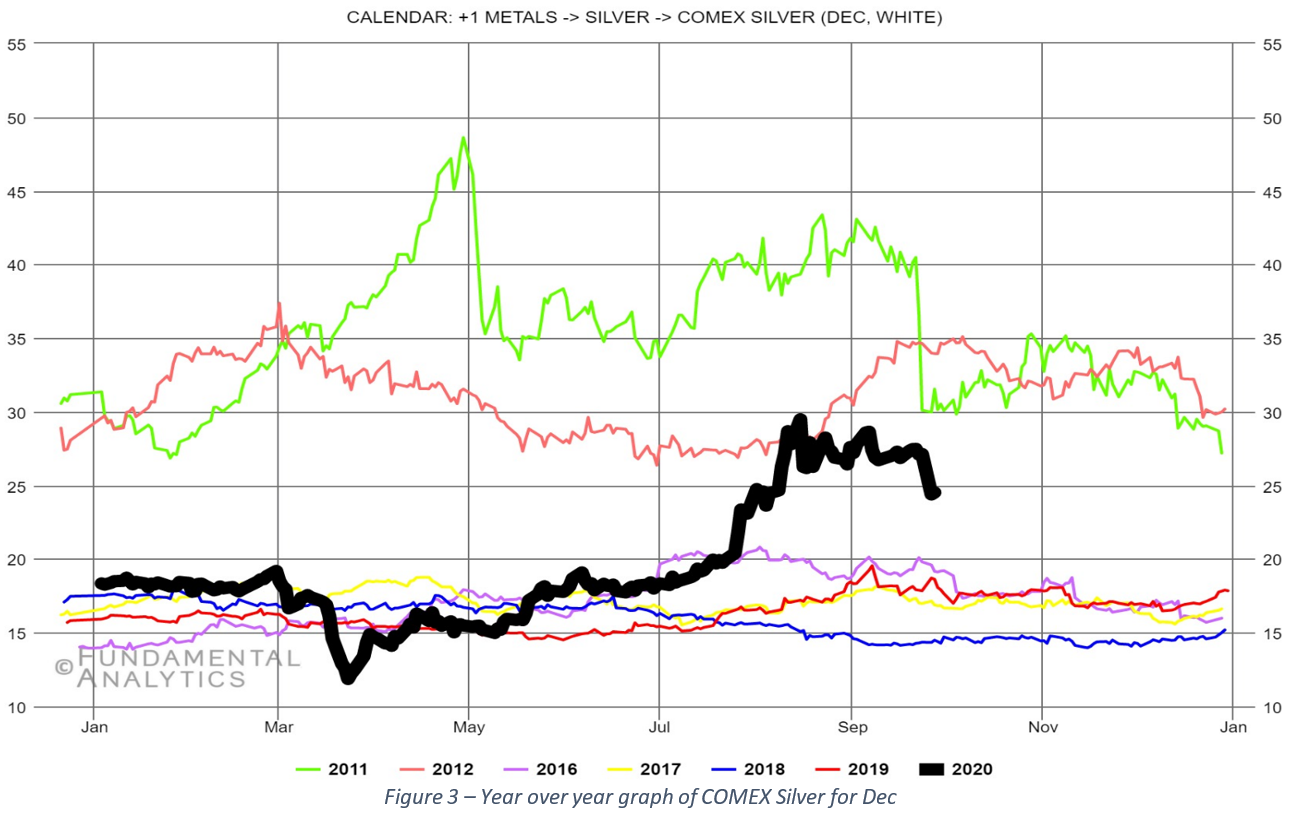 Now for Palladium. December Palladium closed at $2229.6 yesterday down 7.66% from the close last week Tuesday. Total open interest fell 4% last week, giving back the rise seen the previous week. This decrease tied with the fall in the price of palladium indicates the closing of long positions. The latest CFTC report shows net non-commercial fund positions continued to increase, but this was with both an increase in both long and short positions, unlike silver. The palladium/silver ratio continued to climb this week indicating the weakness in silver, possibly regarding news that Europe is again being affected by COVID. Rhodium is still elevated in price but has given some back since last week. Should rhodium remain elevated and silver resume its climb, indicating continued industrial strength, we would expect to see continued upward pressure on palladium. 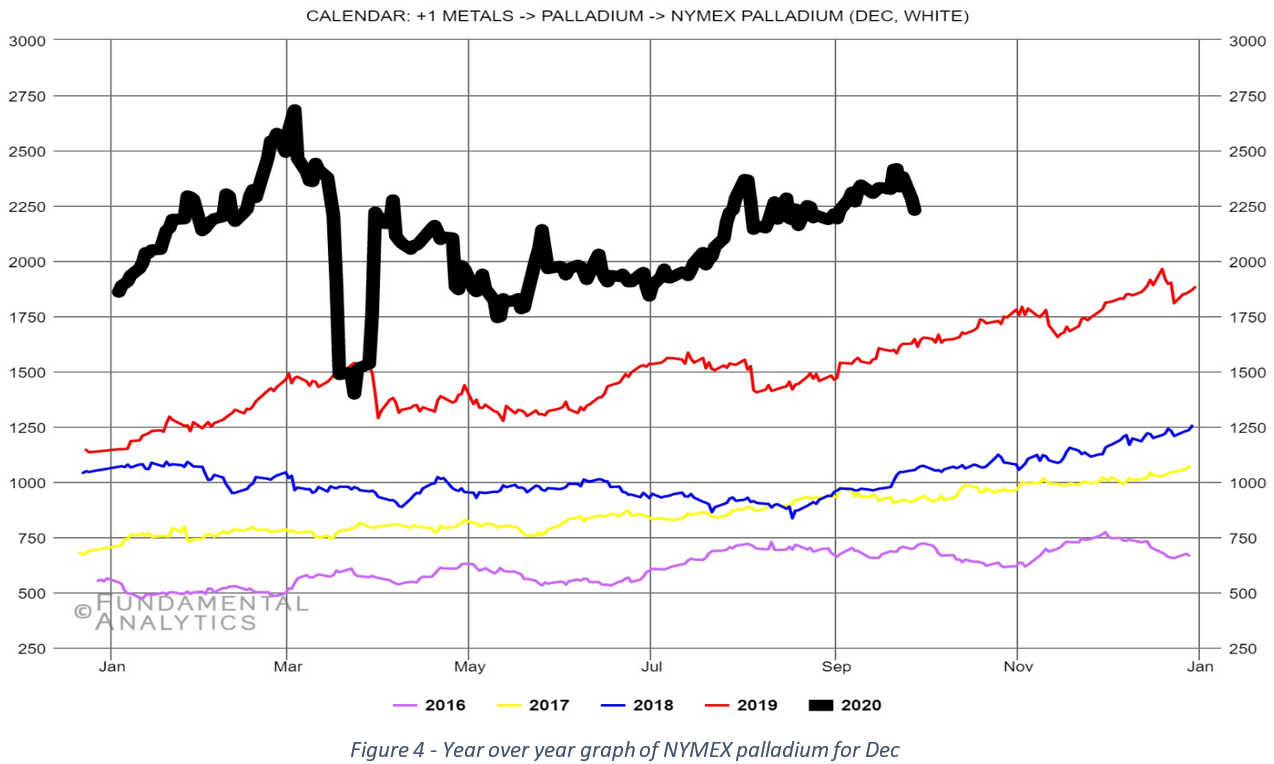 The final thoughts I leave with you are surrounding the basic pressures affecting the prices of metals. Frank Giustra, CEO of Fiore Group, has given only a few interviews over the last few years on his view on gold and the money supply. I have found them to be to the point and useful. The most recent interview was published yesterday, titled “The US Dollar, Gold Price, Gold Stocks, Philanthropy, Inequality, Taxation and Growth – A Freewheeling Conversation Between Ross Beaty and Frank Giustra” and can be found here. This ‘interview’ was 40+ minutes and more of a free discussion between Mr. Giustra and Mr. Beaty. The first part was useful in outlining what Mr. Giustra said he believes are main fundamentals that will continue to drive the price of gold. These are the inability of the Federal Reserve to raise interest rates without causing severe damage to the economy and world-wide political instability, some of the worst he has seen in his lifetime.  These are positive for gold meaning he believes gold will continue to rise longer term.  Why do I mention his views? Because this week saw declines in gold, silver, and palladium prices. We expect to see continued volatility in these metals’ prices, possibly with some continued downward pressure on gold. This downward pressure is driven by the recent reduction in inflation expectations resulting in rising long-term yields, news regarding possible new lockdowns in Europe due to COVID and increased news regarding possible deflation. However, longer term we believe there will be continued pressures to drive up the price of gold.