Prices for precious metals are down today, as partial lockdowns are implemented in Europe and record cases of Covid-19 are reported in the US and Europe. Demand for ICU beds is rising which exacerbates the fear that a second wave is taking hold in the US and Europe. Prices are pressured as liquidity demand increases given the market downturn, and especially as margin calls may be coming in. Such downward pressure on the precious metals might continue as market turmoil and volatility are rising. They should stabilize within 6-9 trading days and they have good chances of moving upwards from then on. The front month contracts for gold and silver were all down from the close on October 20, 2020, with gold and silver down 0.08% and 1.65%, respectively (red arrow identifies close on the 20th). The ratio of the month 1 Gold contract to the month 1 Silver contract (Figure 1) is up 1.59% compared to the close on the 20th.  Since the end of September, the gold/silver ratio is descending, which tends to be positive for gold. With the front month gold and silver contracts closing yesterday at $1908.80 and $24.53, respectively, the gold/silver ratio is now 77.83, 17.6% higher than the corresponding 15-year average. December gold (Figure 2) closed yesterday at $1911.90, down 0.18% and December silver (Figure 3) closed at $24.57, down 1.64% from the close on October 20th. 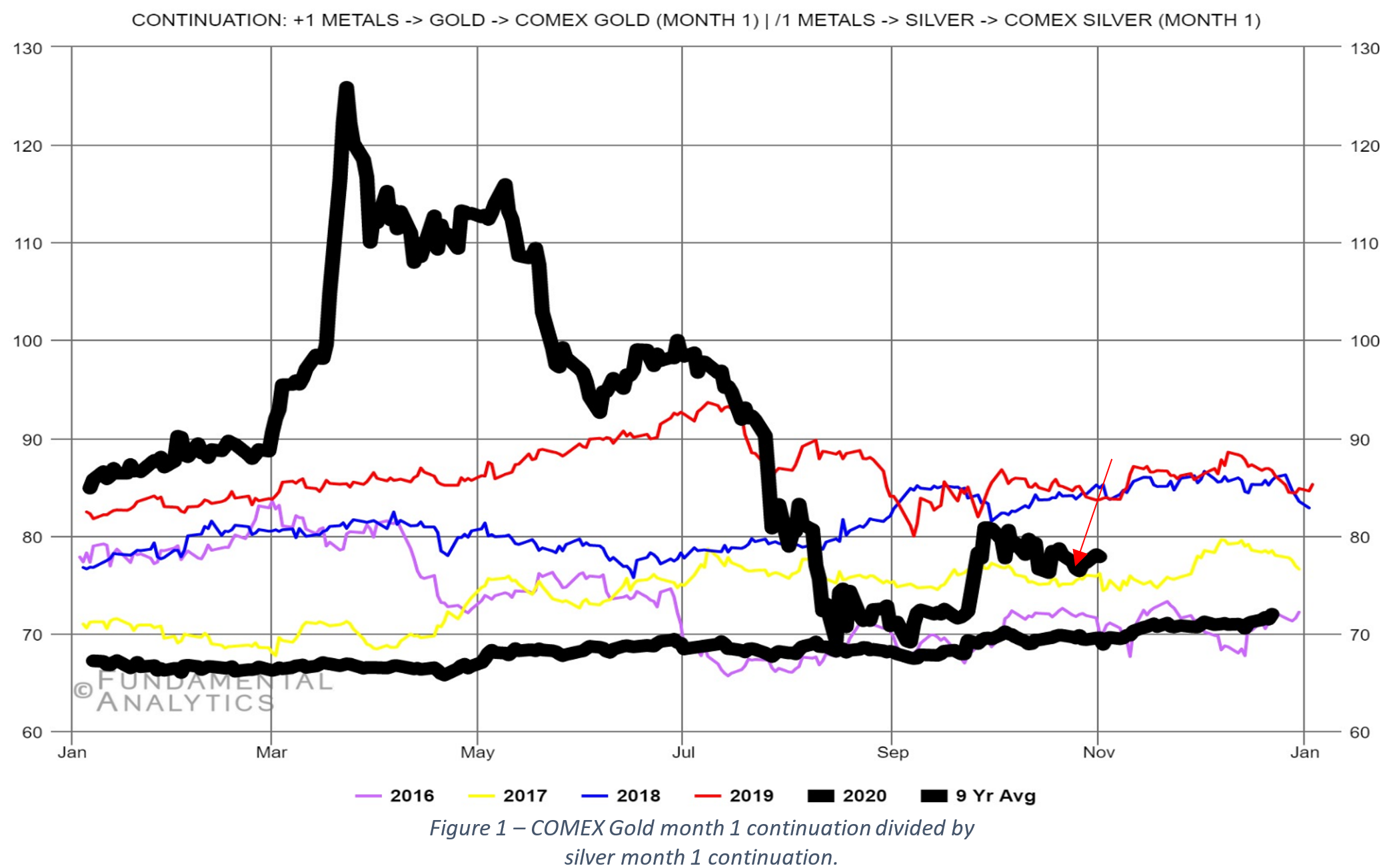 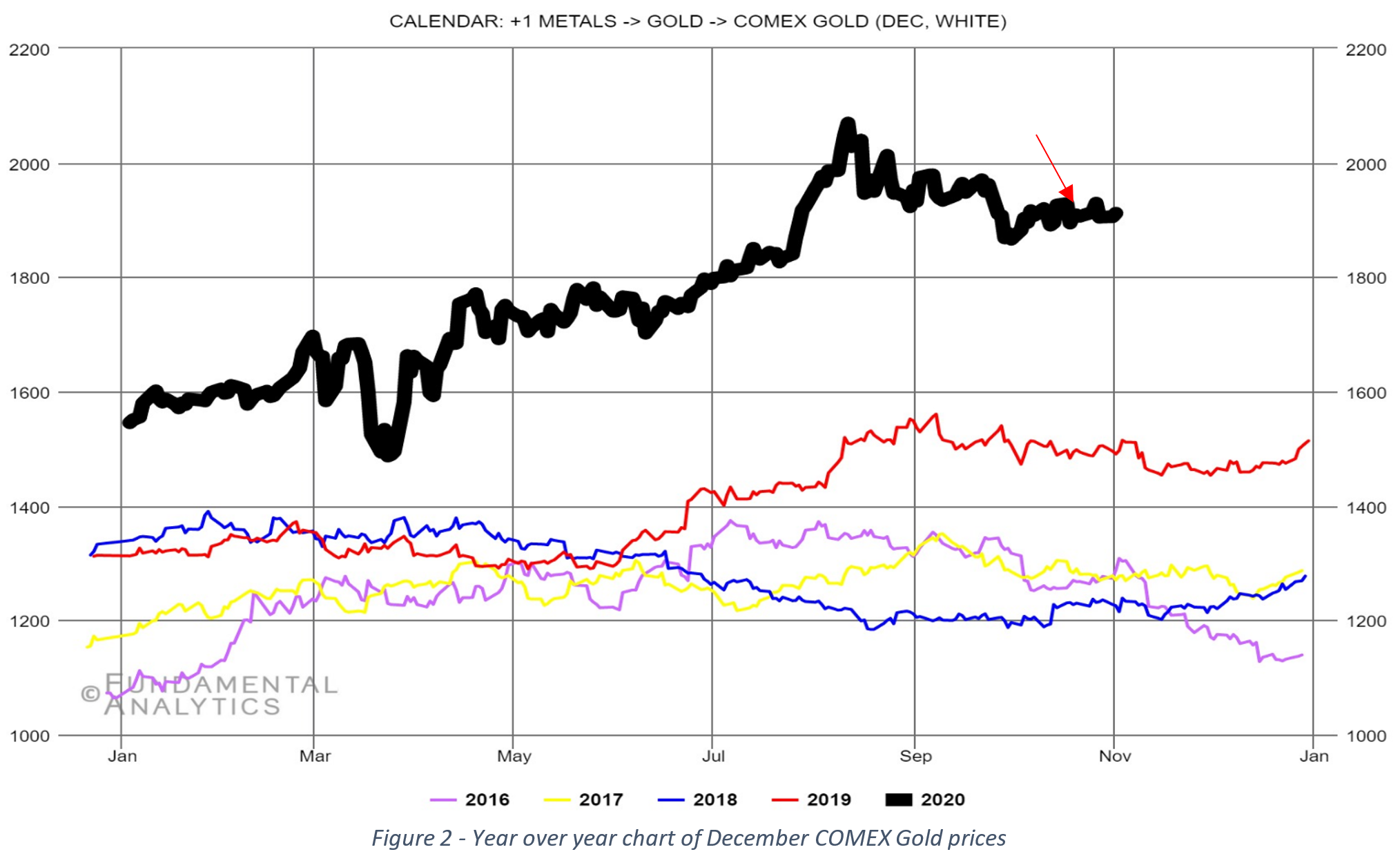 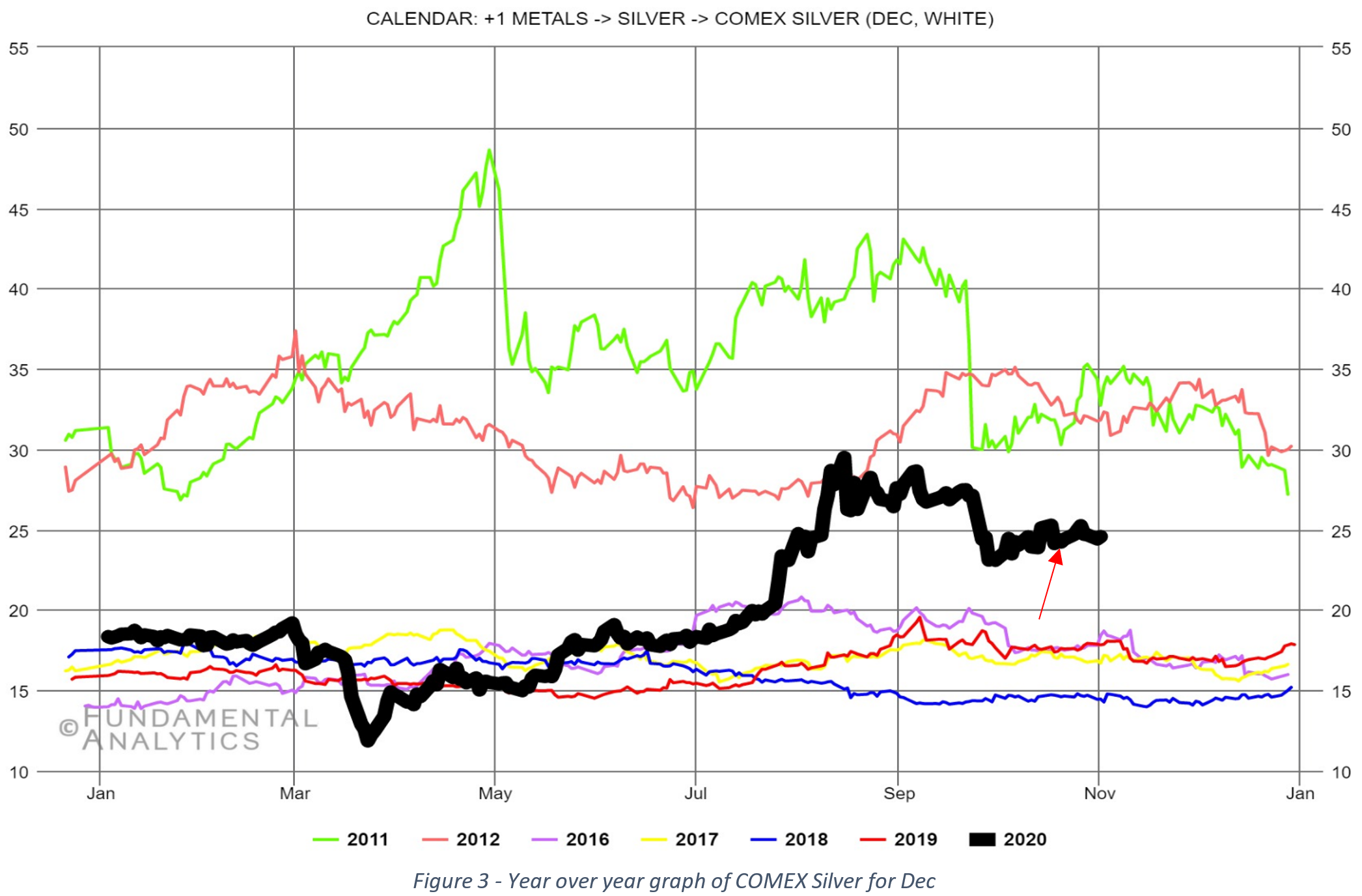 Now for Palladium. December Palladium closed at $2353.90 yesterday, down 2.64% from the close last week Tuesday. Total open interest continues to slowly rise, up 4.9% from Tuesday last week. The Oct 20th CFTC report shows an increase of 0.8% in non-commercial net fund positions.  As we have discussed palladium tends to follow the price of rhodium due to similar uses in catalytic converters in gasoline powered engines.  As rhodium price rises, lower priced palladium is substituted for rhodium, increasing palladium demand, and thus keeping upward price pressure on the metal. With recent news of additional shutdowns, due to COVID across the US and Europe, this may put downward pressure on both metals over the next few weeks. 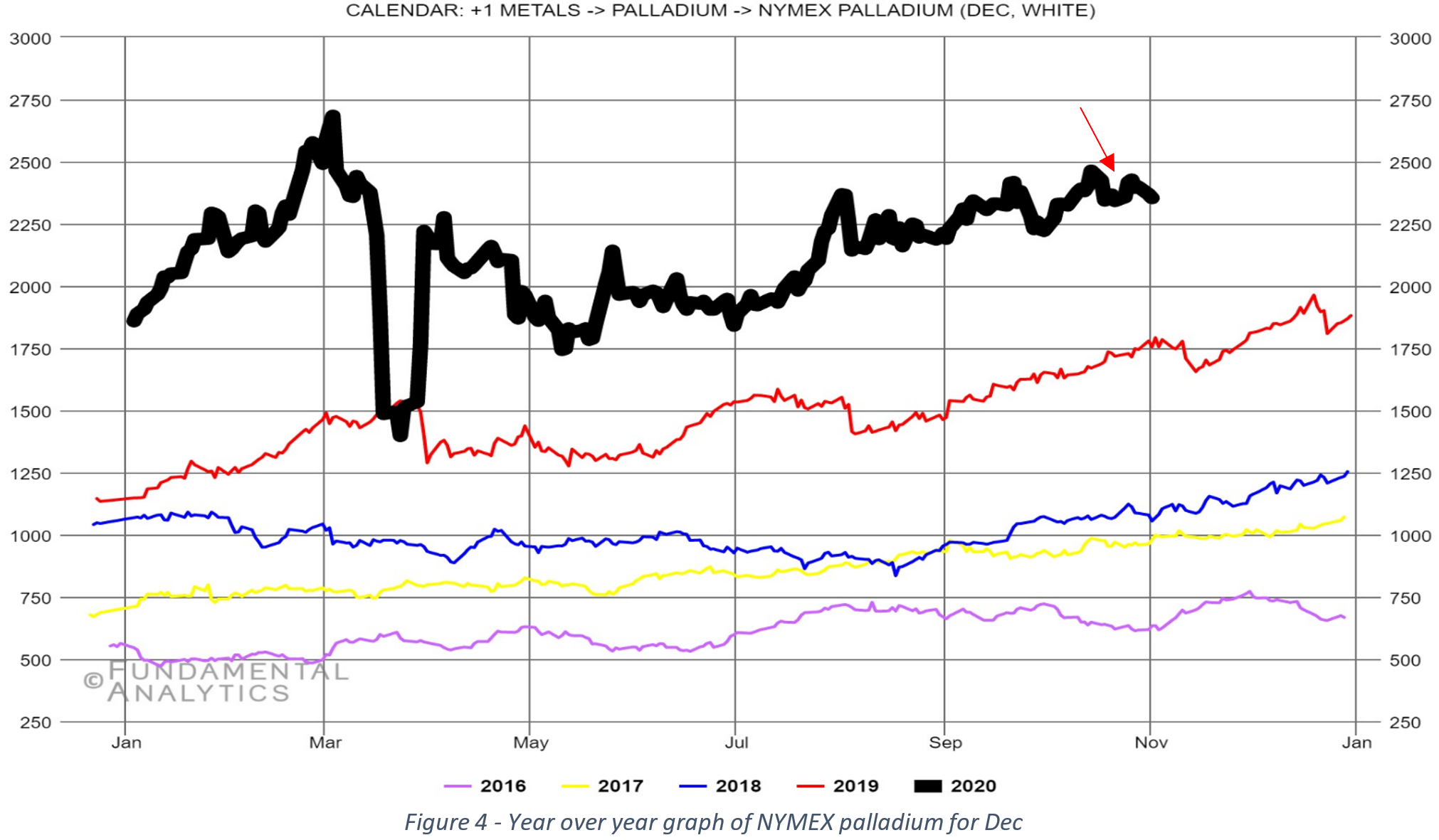 The final thought I leave with you today is a regarding the price of palladium.  Michael A. Gayed, CFA wrote an article and published through Seeking Alpha on October 19th.  Even though the article was published 9 days ago, it contains a good summary of potential upside and risks for palladium for the next few years.  The article can be found here.  In summary, he continues to see a long-term demand-supply mismatch, with demand larger than supply.  Palladium demand is being driven by European consumers continuing to switch from diesel to gasoline powered vehicles, the introduction of RDE tests in Europe and increased exhaust standards in China. The risks (lower demand and more supply, but longer term) may be driven by newer lower priced materials to replace palladium and potentially new deposits of the metal. 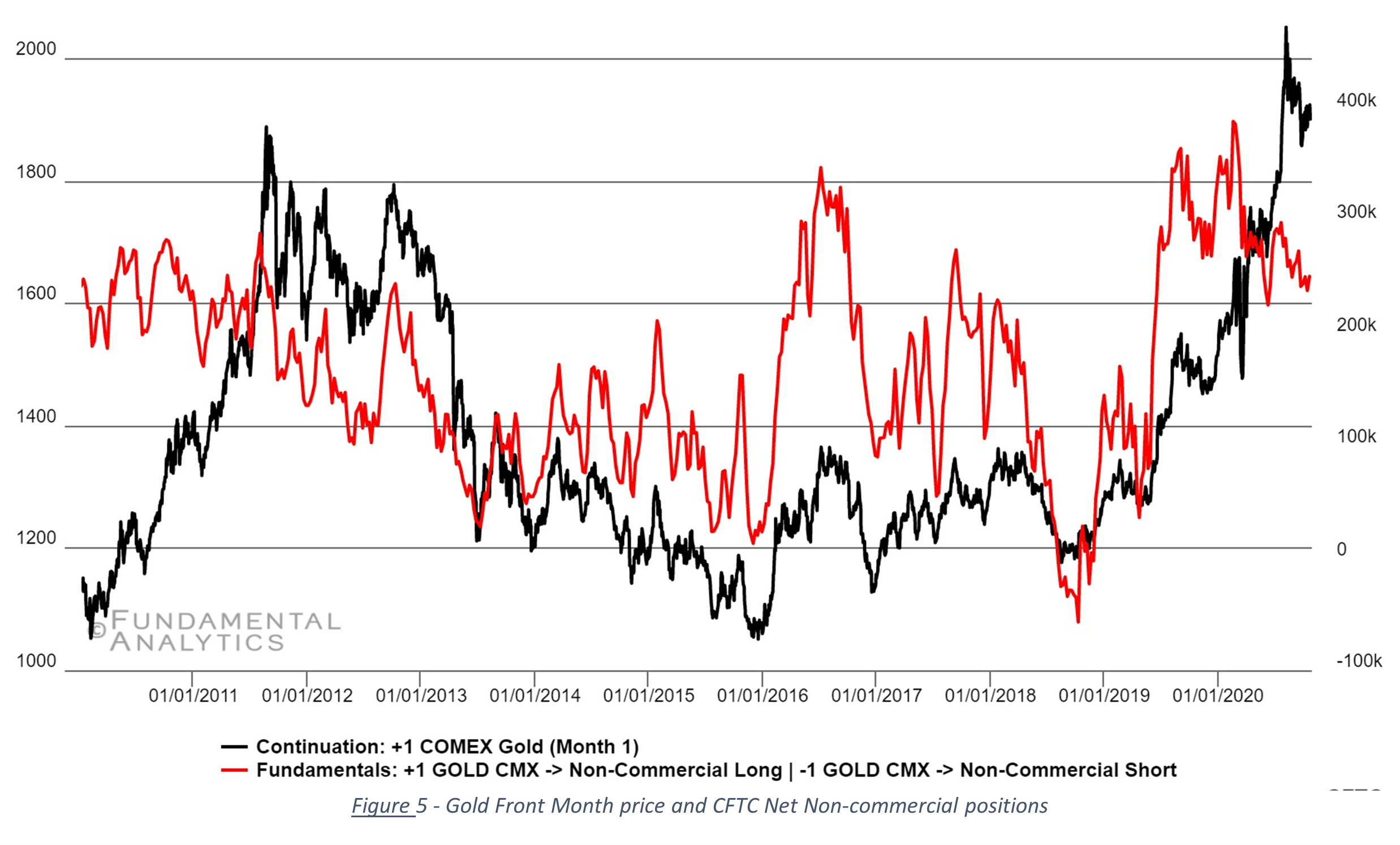