The goal of this report is to provide our readers with some important fundamental and technical trends in commodity markets this week. 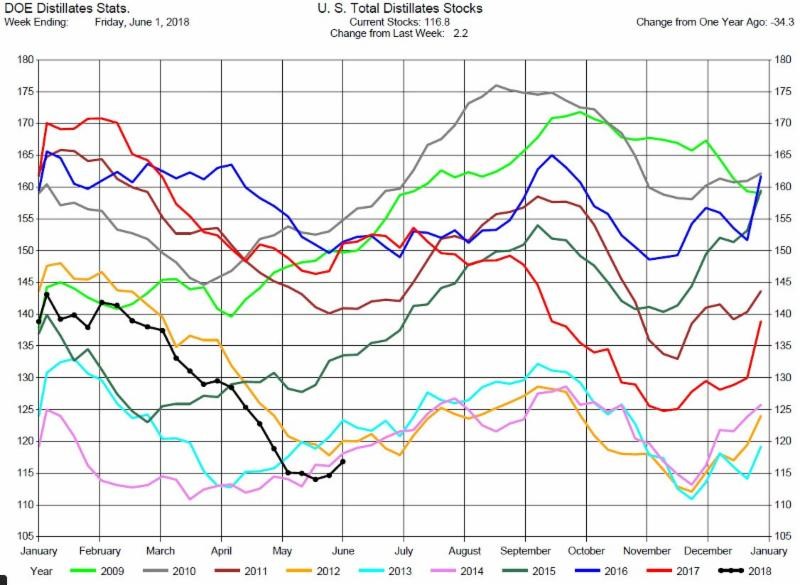 The ratio of the Demand to Stocks to the Days Forward Supply, a measure that adjusts for Stocks and Demand, is also at historic lows as shown in the chart below where the black line represents 2018. 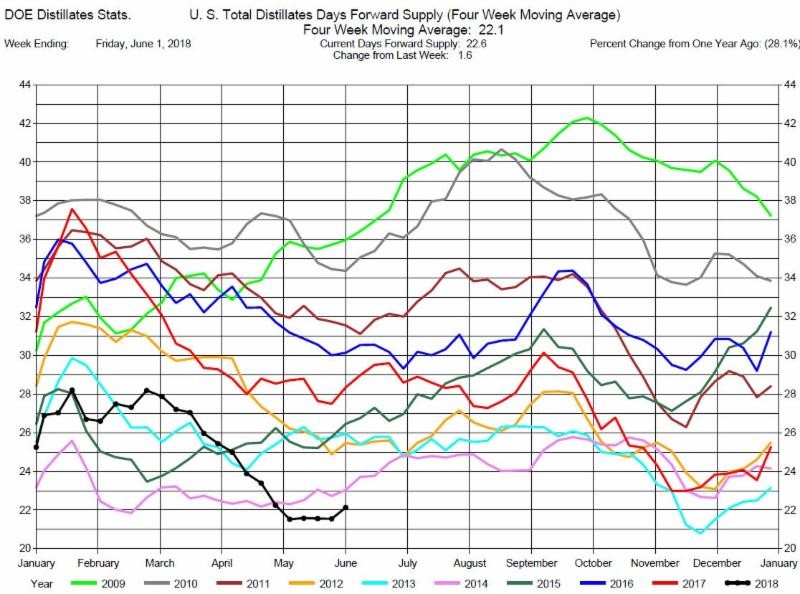 As a result, Heating Oil prices have dropped less than Crude Oil prices have dropped since May 29. Therefore the refiner’s margin – i.e. the Crack Spread, which is the difference between the raw material cost, Crude Oil, and the finished product price, Heating Oil – has widened. This is clearly illustrated in the December Heating Oil Crack Spread chart below, where the black line represents 2018. This is valuable to refiners’ margins and if this situation continues traders may consider going long the December or January Crack Spread. 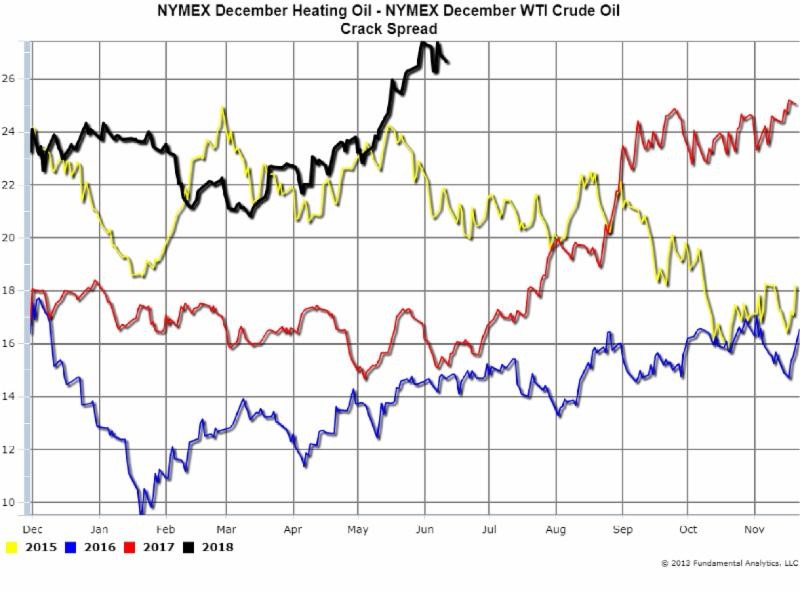 Agriculture Market Update: USDA World Agricultural Supply and Demand Report
Soybeans:
The June USDA WASDE Report today indicated that US Soybean supplies will likely fall in the upcoming marketing year due to high domestic demand and strong exports. The value of the July futures contract for Soybeans jumped by 5 cents per bushel after the report was released but fell back during the trading day. We will need to view the longer term implications on price. However, if Ending Stocks estimates continue to reduce a trader may consider going long November Soybeans and a producer may consider putting on a hedge. 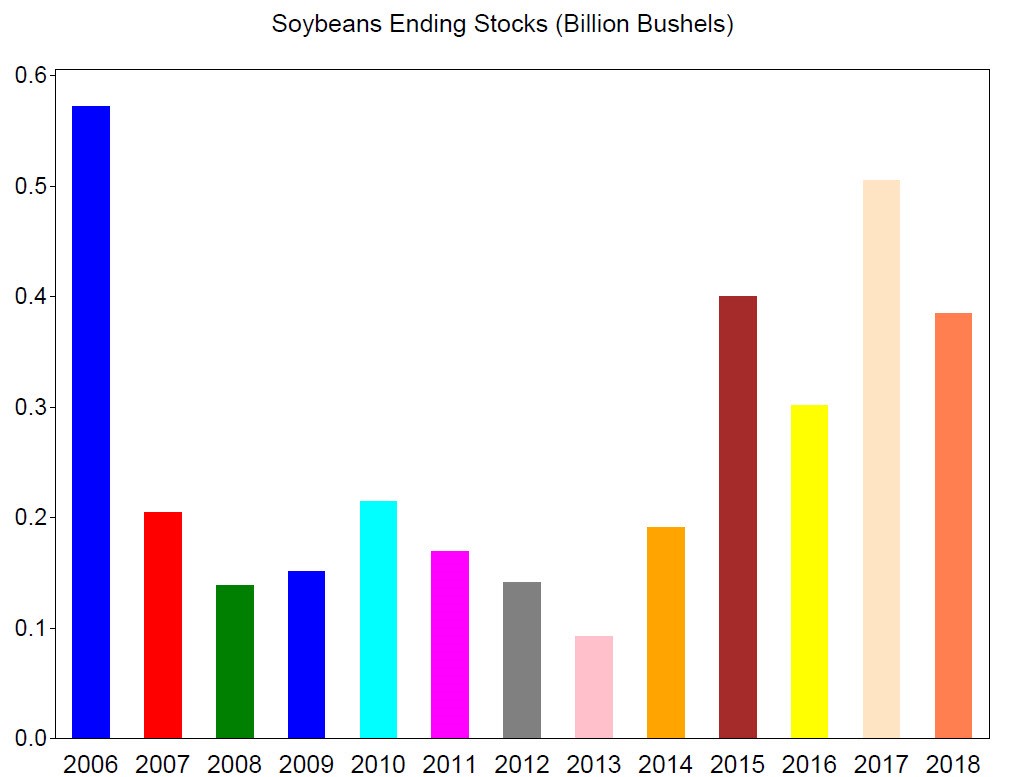 Corn:
Corn futures also jumped after the report was released since the June numbers were below Reuters analysts’ estimates. The July Corn futures contract jumped by 4 cents per bushel. Corn continued to rally throughout the trading day. We will watch to see if this rally is sustained. Should the Ending Stocks projections continue to decline a trader may consider going long outrights or bull spreads and producers may consider hedging their production. 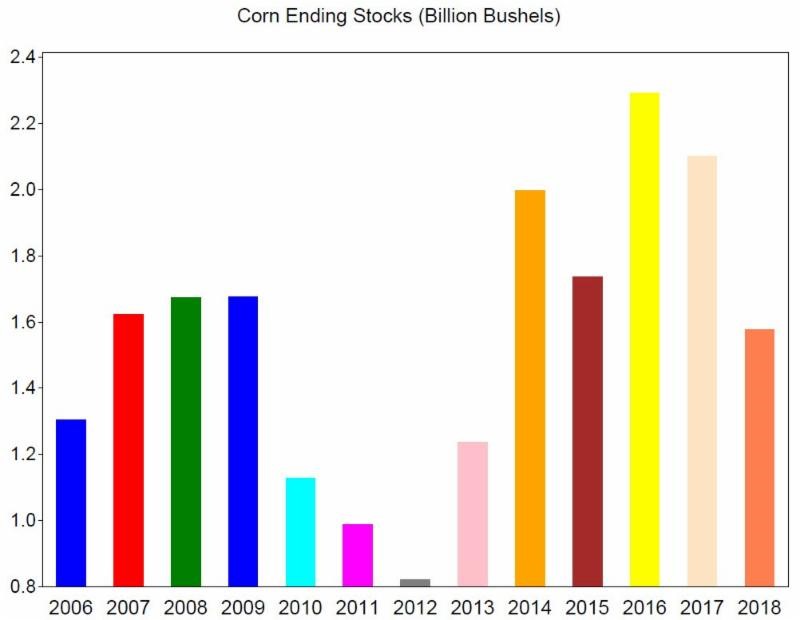 Wheat:
The July Wheat contract jumped from by 9 cents per bushel after the report was released, even though the June numbers were in line with Reuters analysts’ estimates. Wheat rallied even stronger than Corn throughout the trading day. If Wheat continues to outperform Corn a producer may consider a Wheat to Corn hedge play to protect production.
Ending stocks of Wheat at 1.080 billion bushels for 2017/18 were in line with Reuters analysts’ estimates of 1.079. For 2018/19, ending stocks at .946 billion bushels were slightly below estimates of .958 billion bushels. The chart below shows Wheat ending stocks back to 2006/07. 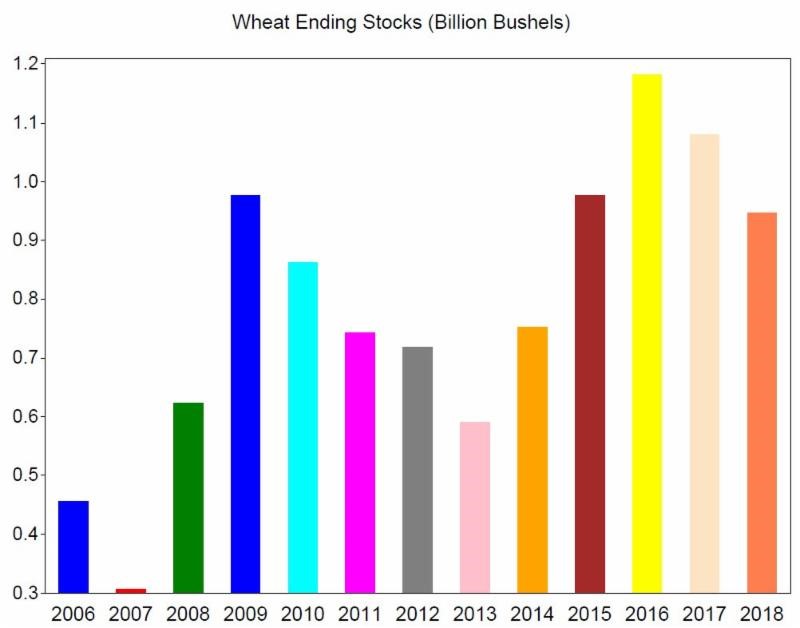